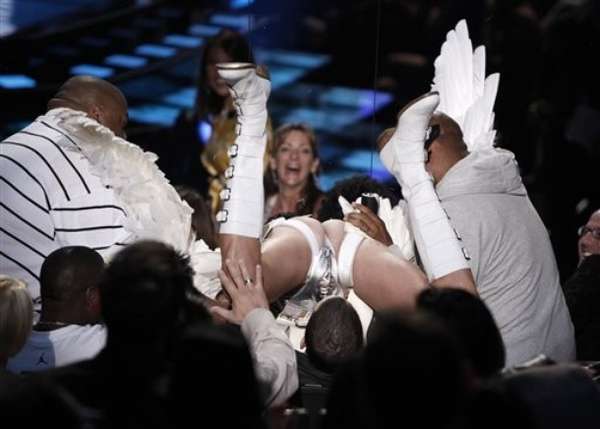 Ayman — June 1, 2009 — Naughty
References: daylife & justjared.buzznet
Share on Facebook Share on Twitter Share on LinkedIn Share on Pinterest
Rapper Eminem got a little too close for comfort encounter with Brüno at the the 2009 MTV Movie Awards. Brüno, the Austrian fashion journalist alter ego of actor Sacha Baron Cohen, has wrecked havoc at fashion shows during the filming of his new movie. But his stunt at the 2009 MTV Movie Awards, in which he landed on top of Eminem, giving him a close up view of his rear, might take the cake.

Set to announce the winner of the “Best Male Performance," Brüno descended from the roof to the music of Enigma. However, due to a ‘malfunction’ in the equipment, he landed in the lap of Eminem in a 69 teabagging position. The stunt is obviously staged, and Eminem was most likely in on it, but it was very well played. Eminem ended up storming off the show after his entourage 'roughed' up Brüno a bit.

In fact, from the stunned looks of many of the attendees, including “Best Male Performance” winner Zac Efron, they bought it.

Hopefully the footage will be used when the movie gets a DVD release.
6.7
Score
Popularity
Activity
Freshness
Get the 2021 Trend Report FREE