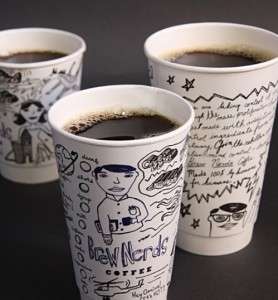 If that wasn't enough to prove their pocket-protector status Brew Nerds also serves food with high school geek-inspired names such as the 'Wedgie' (a large wedge of toast with Nutella, cream cheese frosting, peanut butter or cinnamon sugar).

The Brew Nerds blog is filled with challenges like the one where if you can solve a rubiks cube in under 3 minutes while at a Brew Nerds location, you get a free 450ml coffee. Their motto? “The best coffee in the galaxy…maybe even in the universe.”
4.8
Score
Popularity
Activity
Freshness