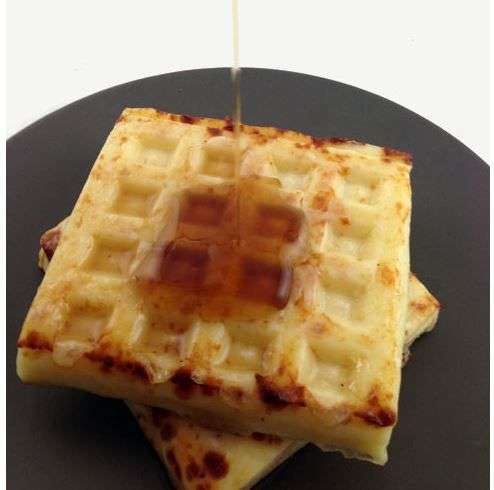 The Bread Cheese Waffle May Result in a Midday Heart-Attack

Meghan Young — April 26, 2013 — Art & Design
References: dudefoods & neatorama
Share on Facebook Share on Twitter Share on LinkedIn Share on Pinterest
Don't be deceived, the Bread Cheese Waffle is no ordinary waffle. In a sense, it is no waffle at all, just an imitation of sorts. Instead of being made out of a typical batter recipe, one slice is a careful cut of bread cheese, a Finnish cheese that physically resembles bread. So a person indulging in a plate of Bread Cheese Waffles is really asking for a midday heart-attack.

Conceived by Nick of DudeFoods, who also indulged people with a chocolate chip cookie ice cream cone and lasagne burger, the Bread Cheese Waffle may be one of his more simpler creations, but that doesn't mean it isn't one of his most extreme. Baked in a waffle iron, he even drizzles syrup on it.
0.7
Score
Popularity
Activity
Freshness
Get Trend Hunter Dashboard