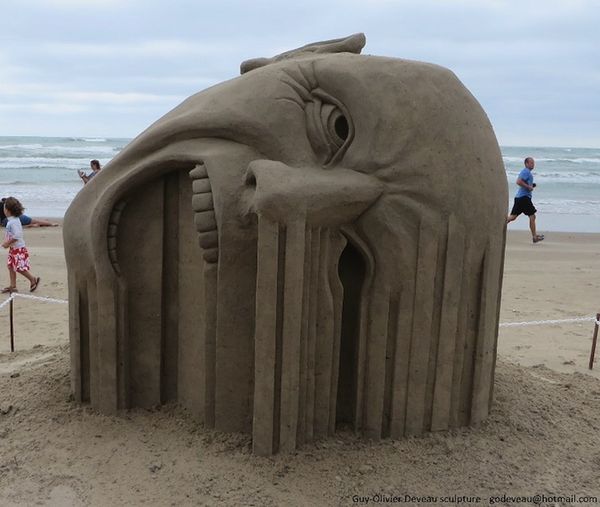 The 'Bleeding' Sculpture is a Demonic Expression of Fear

The Quebec City-based artist created the piece as part of the Sandcastle Days 2013 exhibit, and features a bald man's head facing sideways, with half his face slowly getting sucked into the sand. Almost as if screaming from agony -- with his one remaining eye facing up and his mouth gaped open -- the giant, bald slumbering head expresses a surreal discomfort. Deveau's 'Bleeding' sculpture was exhibited in South Padre Island, Texas, and gave visitors a distinctly unusual spectacle to behold.

Deveau has previously worked with ice, snow and wood before, but prefers using sand because of the intricate detail and sharp edges that can be created.
2.6
Score
Popularity
Activity
Freshness
Get Trend Hunter Dashboard

War Simulation Memorials
The 9,000 Stenciled Human Silhouettes Remembers Those Who Fell on D-Day