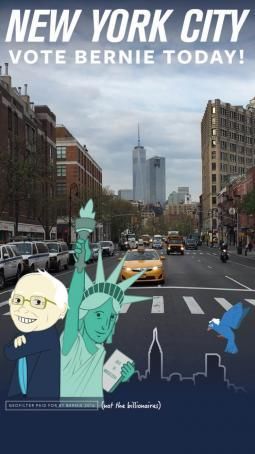 Rebecca Byers — April 20, 2016 — Pop Culture
References: adage
Share on Facebook Share on Twitter Share on LinkedIn Share on Pinterest
The Bernie Sanders Snapchat Geofilters were launched by the Democratic presidential nominee hopeful and his team on the day of New York State's primary day, April 19, 2016. The sponsored Geofilters included one available for Snapchat users across the state of New York and a dedicated New York City filter that was accessible within the city's boundaries.

The New York City Bernie Sanders Snapchat Geofilter featured an animated likeness of Bernie leaning up against the Statue of Liberty, while the filter encouraged individuals to get out and vote. The ad also featured a sponsored note, which stated the ads were paid for by Bernie himself, rather than "the billionaires," in true Sanders style.

The unique use of a sponsored Snapchat Geofilter for election purposes demonstrates the candidate's potential to resonate with Millennial voters in particular.
1.3
Score
Popularity
Activity
Freshness
Attend Future Festival