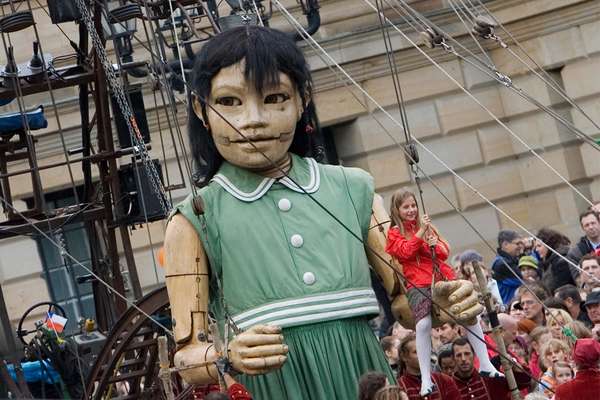 Katherinev123 — October 8, 2009 — World
References: thelocal.de & boston
Share on Facebook Share on Twitter Share on LinkedIn Share on Pinterest
Normal-sized puppets are scary enough, but marionettes the size of houses? I’d run the other way--which is why I wasn’t one of the 1.5 million people that lined the streets of Berlin for the Fall of the Berlin Wall 20th Anniversary, which showcased a several-day performance by France’s Royal de Luxe Street Theatre Company.

The Royal de Luxe featured two gigantic marionettes—the Big Giant, a deep-sea diver, and his niece, the Little Giantess (from the looks of it, she wasn’t so little). Celebrating the Berlin Wall 20th Anniversary, the storyline is a reunion story which has the two giants separated by a wall. The Big Giant returns home from a long but successful expedition to destroy the wall and the two walk through the streets of Berlin to meet each other.
2.2
Score
Popularity
Activity
Freshness
Attend Future Festival

DIY Puppets
Customize Your Own Muppets