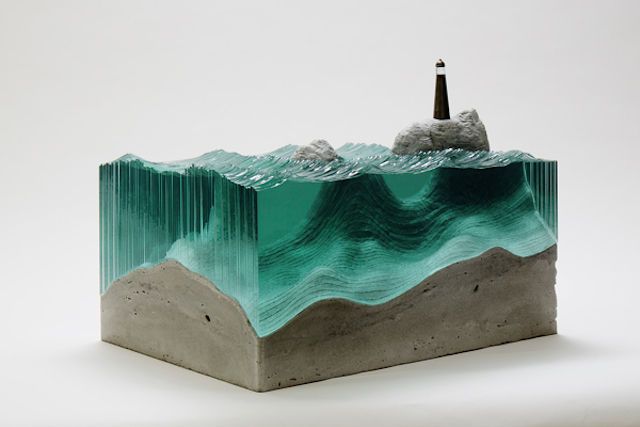 Meghan Young — June 26, 2014 — Art & Design
References: brokenliquid & fubiz.net
Share on Facebook Share on Twitter Share on LinkedIn Share on Pinterest
If it weren't for the work of Ben Young being completely out of context, people might mistake his sculptures for actual water. In fact, they could be encased in an aquarium of sorts and even more people would be fooled. In reality, Ben Young's sculptures are made out of glass. Expertly carved and shaped to take on a watery aesthetic, they are impressive realistic.

Raised in Waihi Beach, New Zealand, and based in Sydney, Australia, it is not surprising that Ben Young is hugely influenced by water. The self-taught artist is a keen surfer and boatbuilder by trade, which makes his chosen art form even more natural. As written on his website, "Though overwhelming in their apparent simplicity, what the common eye won’t realise is that each of Young’s sculptures are hand drawn, hand cut and handcrafted, layer on layer to create the end product."
5.3
Score
Popularity
Activity
Freshness
Get the 2021 Trend Report FREE

Villainous Sugar Sculptures
This Catwoman Bust is Made Entirely From Fondant