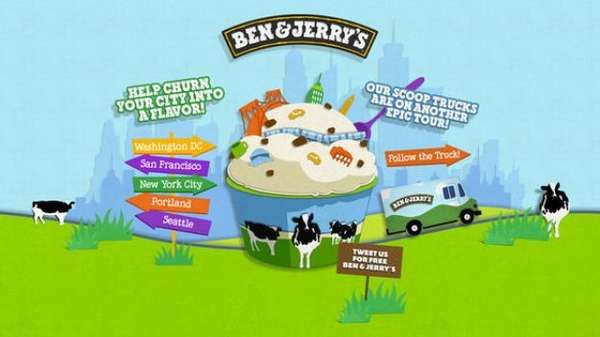 Meghan Young — June 10, 2013 — Marketing
References: citychurned.benjerry & psfk
Share on Facebook Share on Twitter Share on LinkedIn Share on Pinterest
The Ben & Jerry's City Churned ad campaign is getting personal. Inspired by the fact that every city tends to be known for something, and the locals being proud of that something, it is allowing people to vote on what flavor should represent their hometown. Kicking off in five markets: Washington, D.C., San Francisco, New York, Portland and Seattle, it goes to the fans to crowdsource these ingredients.

Each of the five cities will have its own Ben & Jerry's City Churned microsite that will track real-time votes from the motions and residents. To ensure that the designated flavor stays true to its city of origin, Ben & Jerry’s is partnering with local businesses to source the ingredients including Route 11 Chips, Spoonable Caramel, TCHO Chocolate, Kika’s Treats, Rogue Ales, Portland Roasting Coffee, Theo Chocolates and Caffé Vita.
3.8
Score
Popularity
Activity
Freshness
View Innovation Webinars