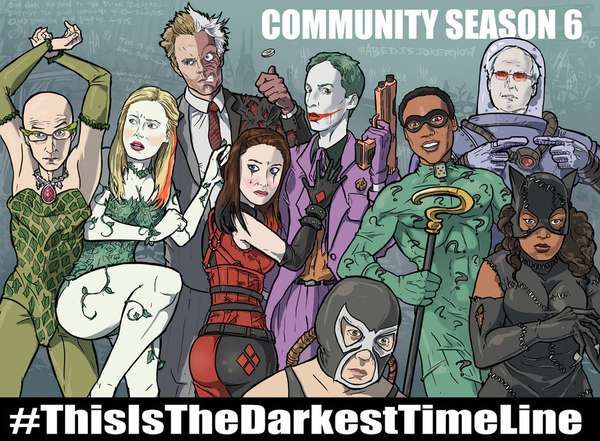 Susan Keefe — December 15, 2011 — Pop Culture
References: holykaw.alltop
Share on Facebook Share on Twitter Share on LinkedIn Share on Pinterest
Artist and avid 'Community' fan Ben Deguzman rendered this hilarious image of the cast of Community as Batman villains. Seriously geeky, this knee-slapping graphic transforms the lovable cast of misfits to the likes of Joker, Two-Face, Poison Ivy and Harlequin. Ben Deguzman created the image as a foreboding image of things to come if NBC decides to yank the popular comedy permanently.

To understand the humor in this picture, you have to know the delightfully quirky show intimately. The hash tag at the bottom of the image that reads #ThisIsTheDarkestTimeline is a direct reference to a third season episode. While a member of the converted could fill you in on all the reasons that this graphic is hilarious, the better plan would be to hunker down with season one and find out for yourself.

Fans of the pop culture sitcom are still waiting anxiously to hear of the show's fate, but chuckle-worthy graphics like this are sure to be a welcome ray of sunshine.
1.3
Score
Popularity
Activity
Freshness
View Innovation Webinars