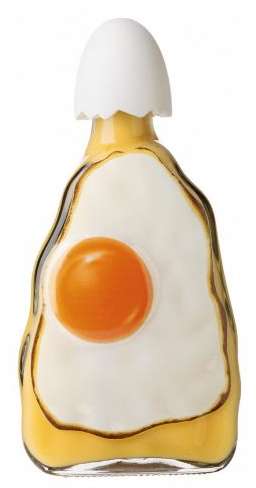 This Liquor Container by Behn Breaks the Mold in Style

John Ibbitson — January 28, 2012 — Lifestyle
References: beachpackagingdesign & boxvox.net
Share on Facebook Share on Twitter Share on LinkedIn Share on Pinterest
What may first look like a yolky mess, is actually a clever bottle design for a German egg liquor by Behn called Spiegelei Eierlikör. The tasty alcohol treat, which I can only imagine is similar to some kind of spiked eggnog, come packed in this hip bottle which is shape to look like the contents spilling out of a cracked egg.

The plastic cap of the bottle is modeled after either a brown or white cracked eggshell, while the glass of the bottle it's attached to is formed in the curvy shape of an uncooked, gooey egg leaking out. The front of the bottle also has a textured and colored surface that resembles that of a fried egg. The sophisticated design of this bottle also forgoes any branding, as you can see from the lack of a name or company insignia on the bottle, making this delicious booze from Behn one that thwarts your eggpectations.
0.6
Score
Popularity
Activity
Freshness
Jeremy Gutsche Keynote Speaker