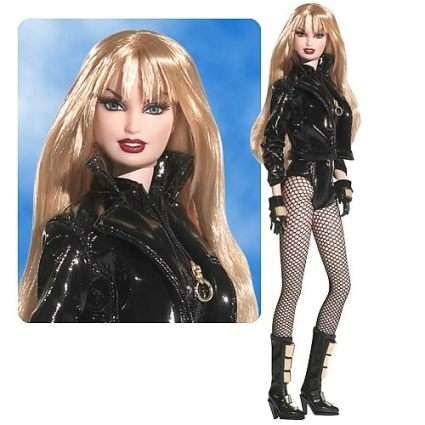 "The combination of the Black Canary's courage, fighting prowess, and her sex appeal (accentuated by her characteristic fishnet stockings) has resulted in her being referred to as 'The Blonde Bombshell,'" Wikipedia explains of the original character.

"Black Canary is noted for her martial-arts skills and her 'Canary Cry' â€“ a high powered, sonic scream with the ability to shatter objects and incapacitate villains."

The fetish Barbie will become available in the fall, but there's always the Catwoman Barbie to tie you over. If Mattel really wanted to capitalize on the S&M trend, they'd release a Ken doll wearing a Male Corset...

As the image in the gallery affirms, celebrities have been wearing this look in public, even in broad day light, like Kate Moss at Glastonbury in black latex leggings. At least Rihanna saves her PVC chaps for the stage. Other celebrities have been seen in the look as well, including the Olsen Twins and Claudia Schiffer, as has fashion darling Victoria Beckham who has been seen in little black gloves.

Here are some celebrities in support of the S&M look: