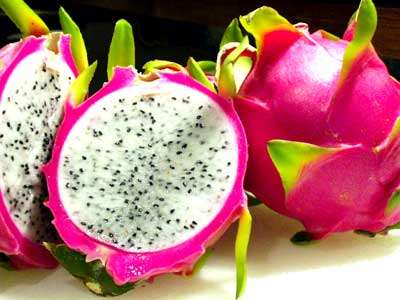 For those who don't know, dragonfruits come from the pitaya cactus. The exotic plant grows in Central and South America as well as South East Asia. They can also be referred to as dragon pearls or strawberry pears.

The electric pink orbs are vibrantly accented with neon green spikes. Under the colourful skin is a porous white flesh containing black poppyseed-like flecks. Tasting like a mild version of kiwis, the appeal of these fruits is more about their exotic aesthetic than their flavour.

Overdone it on the coolers in the past? Anyone who has ever had a few two many sweetened spirits knows that the scent of a particular flavour alone can evoke gag reflexes. Put a bottle of peach cider under my nostrils, and chills accompany the flopping of my stomach. No matter how many times I try it again, I just can't do it. So I tried apple... and hard lemonade... then overdid both. There weren't many more options.

With a huge assortment of yummy flavours to choose from, your summer benders will be a "breeze!"
5.6
Score
Popularity
Activity
Freshness
Get Trend Hunter Dashboard