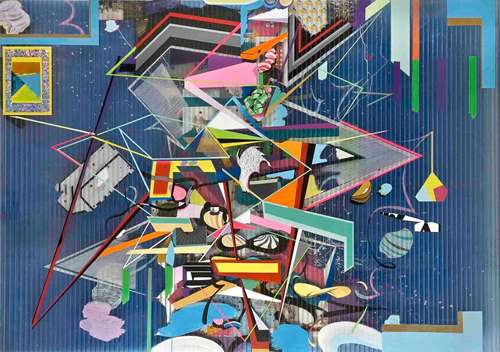 Jessica Marcel — January 11, 2010 — Art & Design
References: poppysebire & art-milk
British artist Danny Rolph is presenting his new exhibit, Automatic Shoes, at the Poppy Sebire Gallery in London from January 14 to February 20, 2010. The exhibit is modern, and could potentially be a cross between Pollack and Kandinsky.

Automatic Shoes will include pieces made from mixed media, which means that he's kind of taken those elementary school collage projects and taken them to an entirely new level.

Implications - Danny Rolph's creations are made by using three different layers. He uses things such as coloring books and magazine clippings to create his works. The featured images show a few of his fantastic collages, which both bright and alluring. They almost look like the images you would find in an I-Spy book.
3.6
Score
Popularity
Activity
Freshness

Frigid Kitchen Art
Straight from the Fridge Exhibit a Worthy Cause