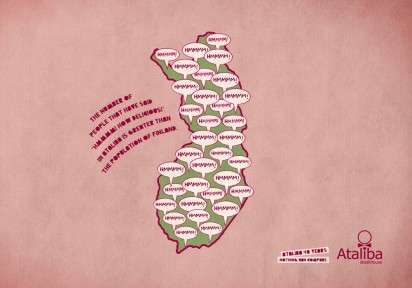 The Ataliba Steakhouse Campaign is Succinct and Humorous

Meghan Young — November 1, 2011 — Marketing
References: sevencom.br & ibelieveinadv
Share on Facebook Share on Twitter Share on LinkedIn Share on Pinterest
Infographics are sweeping the nation thanks to their insightfulness, cleverness and visual appeal; it is no surprise, then, that they would start to inspire the minds behind certain ad campaigns such as the one created for Ataliba Steakhouse. As far as faux-infographics go, this is probably the most blatant of them all. Yet Ataliba Steakhouse gets its point across succinctly and humorously.

Conceived and executed by Brazil-based ad agency Seven Comunicação Total, the Ataliba Steakhouse ad campaign illustrates, thanks to the talented Mário Sérgio Ferreira, just how enjoyable this restaurant is. For instance, one add shows "The number of people that have said 'Hmmmm! How delicious!' in Atiliba is greater than the population of Finland." Now that is one impressive "infographic." Despite the truth behind it, the message is still loud and clear.
4.2
Score
Popularity
Activity
Freshness
Attend Future Festival