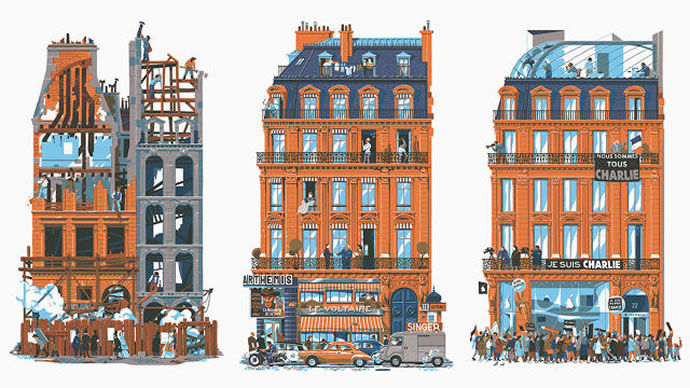 Malika Renee Butss — October 27, 2015 — Art & Design
References: fastcodesign & luxurylaunches
Share on Facebook Share on Twitter Share on LinkedIn Share on Pinterest
French illustrator Vincent Mahe has created a line of architectural illustrations which chart the change of one Parisian block over the last 750 years. Focusing on a single building, these art pieces chronologically display how the City of Lights came to be as beautiful as it is today.

Inspired by the Parisian structures created over generations, Mahe crafted these architectural illustrations for the book '750 Years in Paris' by the Nobrow press. Mahe has stated that buildings tell everything in cities and shed light on famine, peaceful times, poverty, war and wealth. He captures these instances with his 1943 illustration, displaying Nazi banners and signs while his 1956 drawing showcases the return of civilization following the second world war.

From its Black Plague to its stint as World Cup host, Paris has evolved throughout history and these architectural illustrations display this journey beautifully.
3.8
Score
Popularity
Activity
Freshness
View Innovation Webinars