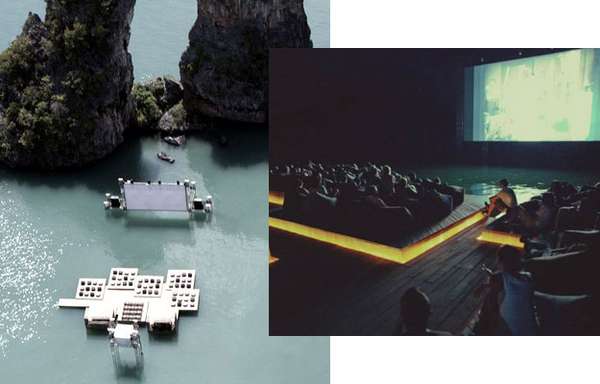 Meghan Young — March 31, 2012 — Art & Design
References: buro-os & fastcodesign
Share on Facebook Share on Twitter Share on LinkedIn Share on Pinterest
The Archipelago Cinema is a dream outdoor movie theater for film buffs, adventurists and travel lovers -- or, better yet, an adventurous traveling film buff. Located amidst the rocky shoreline of Yao Noi, Thailand, and surrounded by stunning turquoise waters, it offered a once-in-a-lifetime movie-going experience that is at once exotic and exciting.

Designed by German-born, Beijing-based architect Ole Scheeren, the Archipelago Cinema was commissioned by Film on the Rocks Yao Noi, the organization that organized the new film festival. Essentially, the Archipelago Cinema is a large raft made out of recycled materials. The designer described the experience as "a sense of temporality, randomness, almost like driftwood."

After its debut, the Archipelago Cinema was disassembled and donated to the village where it was built as a playground and floating theatre.