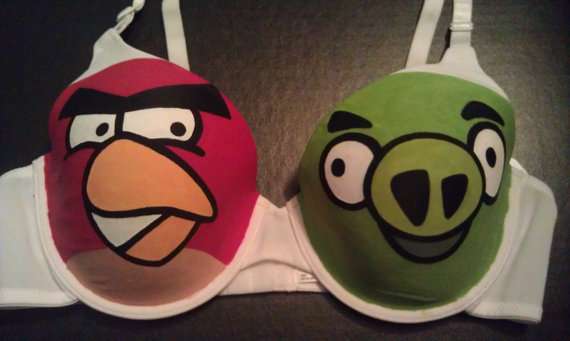 The Angry Birds Bra is Sultry and Squawky

Deborah Kim — August 3, 2011 — Tech
References: etsy & etsy
The Angry Birds bra is perfect for the gamer girl in your life, and would make a great present for any friends or girlfriends. It's no wonder that the Angry Birds logo and design is being seen everywhere -- it is nearly impossible to avoid the craze of it all. Even children and grandparents are discovering this highly addictive game, and it has only continued to gain profits and sell copies since its release date in late December of 2009.

The Angry Birds game has been coined as the most mainstream games out right now, and its popularity reaches all around the world. Given the extreme acclaim and approval, it was just a matter of time before some creative mind created an Angry Birds bra. Now you can show off your extreme passion for Angry Birds in a very creative, yet seductive way.
5.2
Score
Popularity
Activity
Freshness