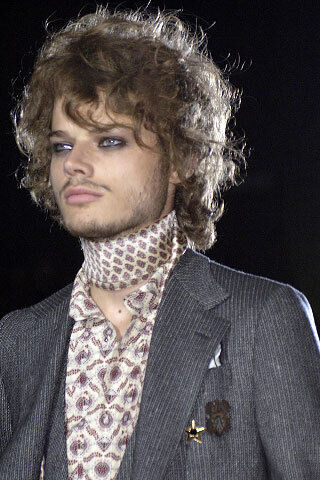 From a London blue topaz velvet suit paired with a skinny scarf and patterned shirt to a teddy bear brown velvet suit, the look evoked visions of Eastern European gypsies, while oddly, at the same time, bringing to mind images of a younger David Bowie.

They carried man purses with patterns that looked as if they were inspired by Oriental carpets.

The color pallet centered around warm shades of brown, contrasted with oddly complimentary navies and cobalts. Fabrics were luxurious, from velvets to leather and opulent furs, perfect for the intended cooler temperates of the fall collections. In keeping with the season, the models were bundled from head to toe, necks covered in nearly every look, either by voluminous turtle necks or patterned scarves.

Several outfits featured belts tied at the front, some accessorized with coins and charms, the open tail cascading down their left hips, again, bringing back those gypsy notes.

Later in the show they began throwing in splashes of red on accessories like belts or embroidered shoulder pads. The show ended in a classic hue, the models dressed in different shades and textures of black.