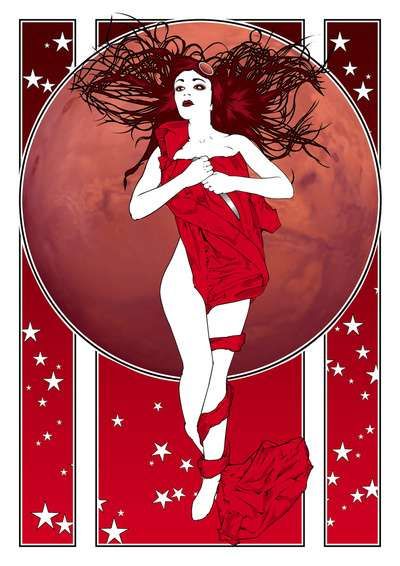 Jason Soy — February 8, 2012 — Art & Design
References: society6 & lacarpa.tumblr
Share on Facebook Share on Twitter Share on LinkedIn Share on Pinterest
The concept of these Andrew Mark Hunter illustrations is highly evocative of the anime series Sailor Moon. With beautiful women representing Mars, Venus, Saturn, Mercury and Earth’s Moon, Hunter has essentially personified celestial bodies, making them much more relatable than giant orbs revolving around the sun. It also makes for some snazzy fantasy renderings that are sure to please girly consumers everywhere.

Each picture in this Andrew Mark Hunter series features their respective planets and moons behind stylized porcelain-skin ladies. Because of their pure white complexions, the resulting images look like Patrick Nagel’s iconic '80s artwork. Rather than wearing clothing, each female space personification is covered up in fabrics resembling bed sheets. This adds a layer of seductiveness to each picture, which is something you normally would not associate with astronomy.
4
Score
Popularity
Activity
Freshness
Get the 2021 Trend Report FREE