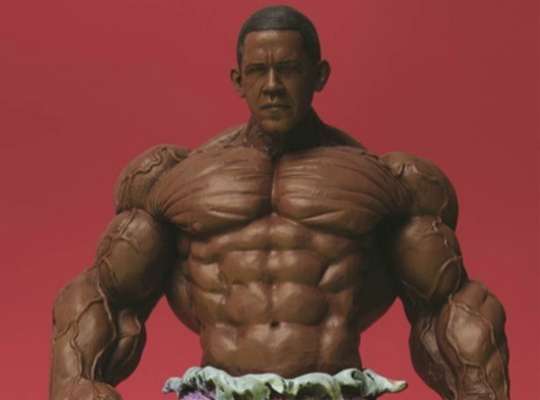 America's Back by Ron English Features Obama as the Hulk

Josh Mears — January 30, 2012 — Pop Culture
References: cluttermagazine
Share on Facebook Share on Twitter Share on LinkedIn Share on Pinterest
Watch out world because 'America's Back' in Ron English’s latest collection. America's Back features the man and the legend, Barack Obama, as the Hulk. To many, Barack is already considered as a superhero and exhibit by Ron English cements it.

The America's Back toy features an action figure that looks almost exactly like the Incredible Hulk, apart from one major difference… he’s Barack Obama. The marvel mock-up stands at the traditional height as other action figurines, and is accompanied by a song. The song that goes with the doll features many stereotypes about the United States, and it is difficult to tell whether or not the lyrics are tongue-in-cheek.

America's Back by Ron English clearly states how most of the world thinks of Barack Obama, love him or hate him he’s improving the world’s impression of America -- but be careful when crossing Obama, you won’t like him when he’s angry -- Obama smash.
1.8
Score
Popularity
Activity
Freshness
Get Better and Faster