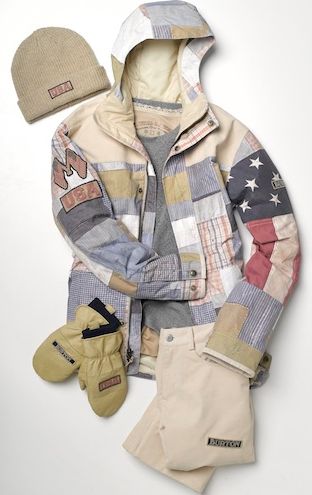 Laura McQuarrie — December 6, 2013 — Special
References: latimes & style
As well as wearing designs from Ralph Lauren for the upcoming 2014 Winter Olympics in Sochi, the American Olympic team will be outfitted by Burton.

The snowboarding team will wear the Burton-designed outfits, which is the perfect way to show support for an American manufacturer of snowboards and snowboarding gear that has made its home in Vermont since 1977. The outfits were revealed at Burton’s flagship store in Vermont earlier this week.

The design for the garments of the American snowboarding team were inspired by a vintage quilt found at an antique fair. The pieces consist of a beige-colored beanie, slacks and yellow mittens. The jacket itself is the standout piece, decorated with a charming weathered patchwork design that exudes classic Americana. The quilt that inspired the patchwork pattern was taken apart and reconstructed, photographed and printed onto the jacket’s waterproof fabric, melding hi-tech fabrics with old world charm beautifully.
3.4
Score
Popularity
Activity
Freshness