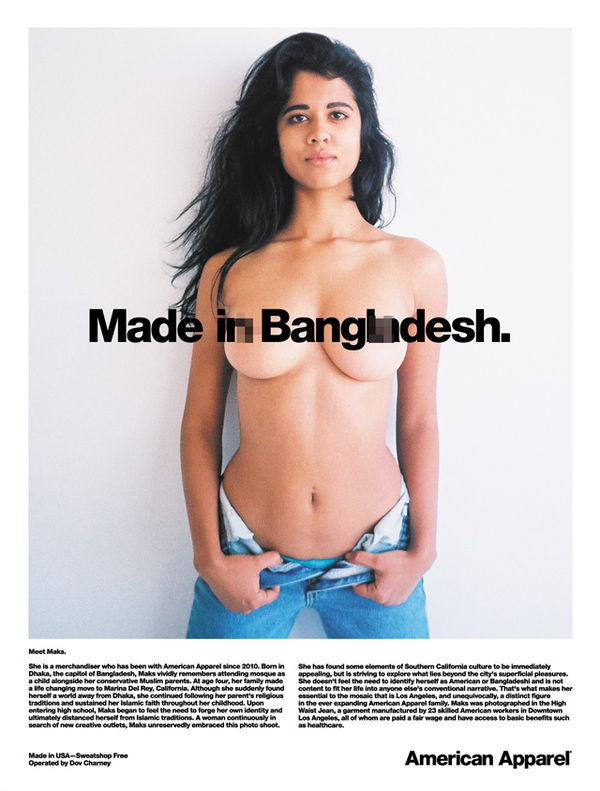 The New American Apparel Ad is Making Waves for Being Bold

Farida Helmy — April 14, 2014 — Naughty
References: store.americanapparel.net & elle
Share on Facebook Share on Twitter Share on LinkedIn Share on Pinterest
Really honing in on its pride for being a sweat-shop label, the new American Apparel ad is causing a stir with the image of an almost-naked Bangladeshi model with just the words "Made in Bangladesh" printed across her bare chest.

Known for its controversial campaigns, the brand always tries to show that its ads are all about the real identity of its customers, not who it looks like from the outside.

In the new American Apparel ad, the model picked was a Bangladesh-born and California-based merchandiser who used to believe in her parents' Islamic traditions until she was in high school when she decided to distance herself to find her own identity.

“She doesn’t feel the need to identify herself as an American or a Bengali and is not content to fit her life into anyone else’s conventional narrative. That’s what makes her essential to the mosaic that is Los Angeles, and unequivocally, a distinct figure in the ever expanding American Apparel family,” says the the American Apparel team.
4.7
Score
Popularity
Activity
Freshness
Get the 2021 Trend Report FREE