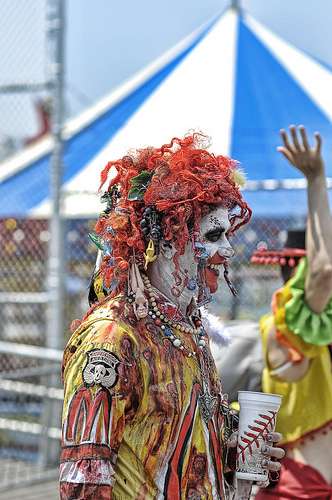 Cowbag — September 8, 2008 — Unique
References: trendhunter
Share on Facebook Share on Twitter Share on LinkedIn Share on Pinterest
I hate Ronald McDonald and I hate clowns. For a bit of cognitive behavioural therapy I decided to do a round up of the ten best Ronald McDonalds I could find online… From buff to baby’s it remains they are all a bit wrong on some level. Of course the all out winner for me is the Ronald Joker.

Japan McDonald’s decided to make him a her with their commercial for Tomato McGrand sandwich. Worse than the real thing although it has apparently built up quite a fetish based following which is just wrong - McHottie apparently. An random official MD approved version. You can see the male Japanese version here.

McDonald’s excels its self in the freaky stakes with this picture from a Indian McDonald's near Kimaya Kothrud.

I’m not apologising for it. If there are reactions then it tells us more about the society we live in. I think a lot of evils in the world are a direct result of religious fanaticism, and this is another little example.

Hats off to this person for pulling off a very good McDonald Inspired Costume - the one problem I can see is that it is less scary than the original.

So hideous I can’t bring myself to talk about it…

The Roni Project is an example of a a spoof presidential campaign for a character based on Ronald McDonald, the project took in street art pieces, a Web site, and performances on the streets.

And talking of street art there is of course the image of Ronald in this Banksy piece - also available in cross stitch.

As Lego art goes this is pretty rubbish - it the best I could find of the 100 so out there. Hoping someone will pick up the gauntlet and make a really awesome one.

This is one of my favourite Ronald images (as in least scary). Love the idea but would have been so much better with “the colonel” and BK King in there too.

A horrible giant Ronald to give me nightmares…

Ron Enligh went to London in May 2008 as a special guest artist at Banksy’s first public stencil art convention, THE CANS FESTIVAL. Queues of fans lined up to snap shots of the oversized super-fat Ronald McDonald was nearly as long as the one to get into The Cans Festival. Street Art at it’s finest!!!

McDonalds Uses Subliminal Advertising (or do they?)