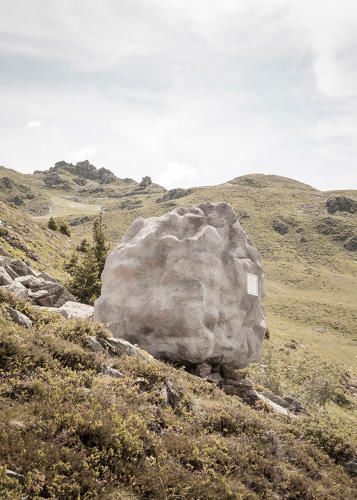 Meghan Young — December 24, 2014 — World
References: a-bureau & fastcodesign
Share on Facebook Share on Twitter Share on LinkedIn Share on Pinterest
Staying in an Alpine cabin brings people closer to nature in a way that more traditional camping fails to do. Antoine, however, is a shelter that brings the experience to a whole new level. Blending completely into its rocky setting, the Alpine cabin is cleverly and creatively disguised as a boulder so as to leave the natural surroundings as undisturbed as possible.

Designed by Bureau A, a Swiss architecture and design firm founded in 2012 by Leopold Banchini and Daniel Zamarbide, the Alpine cabin was inspired by Swiss writer Charles-Ferdinand Ramuz's novel 'Derborence.' It told the story of a man, Antoine, that survives seven weeks buried under the rocks before he manages to escape. Banchini says, "We hope that people will use the cabin to spend a night in these beautiful mountains. But people can also just use it to rest for a while or to eat their sandwich with they hike in the region."
4.1
Score
Popularity
Activity
Freshness
View Innovation Webinars