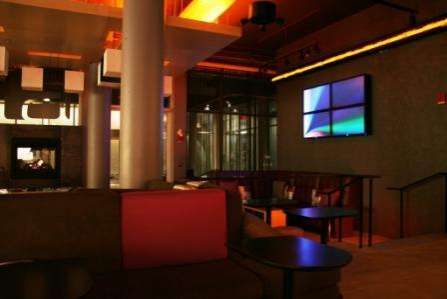 Bianca — August 31, 2008 — Special
References: starwoodhotels & trendhunter
Share on Facebook Share on Twitter Share on LinkedIn Share on Pinterest
Starwood’s new aloft hotel chain has been generating buzz as one of the first value-priced hip hotel chains.  More than a year and a half ago, Trend Hunter first introduced you to the aloft concept, and now we’ve finally been able to follow up with an aloft hotel review.

Our aloft hotel review takes place at the Montreal Airport location.  The hotel opened its doors in June, but already it was swarming with patrons; in fact, that August Saturday, every room in the hotel was booked.

As I stepped out of the cab and peered through the giant glass and stainless steel doors, my initial impression was confirmed: the aloft hotel is young, funky and very high tech.

When you enter the front doors, directly on the left are two touch-screen kiosks meant for airport-bound patrons seeking speedy, efficient check-outs prior to their flights. A twist of the head to the right, and aloft’s slick Re:Fuel station is in sight, a 24 hour refreshment bar that resembles those modern juice bar serving high priced wheatgrass smoothies. Re:Fuel had items like cereal, bagels, ice cream and of course, essential to Montreal, croissants. However, one kicker was that the hotel did not have a full service restaurant.

A few steps forward from the front door, and the area splits. On the right is the circular reception desk, and to the left, a sprawling area oozing with modern décor. The far left corner houses a pool table and directly across from it are two big-screen Mac computers. In the center is a large living room-type space with plenty of funky seating, from patterned couches to tall stools at the illuminated bar.

It’s this area that the hotel clearly tries to promote, something I had already expected after checking out the website. It was played up as a destination to meet other travelers, to exchange stories, and to have (more than) a few drinks.

The back wall of the cutting edge, communal lounge consisted of floor to ceiling glass, with stainless steel, vertical door handles welcoming visitors to the patio which is nestled between the hotel’s walls. On the lounge side is a fireplace which can be seen from in and outside. Directly across from it is the clear glass housing of the aloft swimming pool. The patio itself is awesome, and hotel guests clearly enjoy themselves, sipping on drinks from the bar, nibbling on the complimentary Asian crackers and lounging on stylish grey, lime and cobalt loungers.

It seems that the aloft chain is strongly influenced by its Starwood sister brand, the W chain of hotels.  Each room has a design and functionality that separates aloft from a typical hotel.

My loft had an open bathroom directly on the right, but the sink area next to the entrance, which housed a basin resembling a large porcelain fruit bowl, could be separated from the section that housed the walk-in shower and toilet.

Across from the bed—which lay under 9 feet ceilings—was a wall-mounted 42” LCD TV. Below it was a bench, and next to it, a desk area which included a gadget docking station which connects to the TV, so you can easily watch your own media, like your personal travel slideshows.

The Starwood aloft Montreal is hands down a text-book hip hotel and an ideal destination for young business travelers looking for a hip airport location.
4.1
Score
Popularity
Activity
Freshness
Get Trend Hunter Dashboard