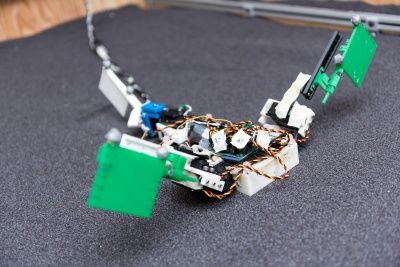 The 'MuddyBot' is an All-Terrain Robot that Mimics a Mudskipper

Joey Haar — July 8, 2016 — Tech
References: cos.gatech.edu & sciencedaily
Share on Facebook Share on Twitter Share on LinkedIn Share on Pinterest
In mimicking the mudskipper, a 360 million-year-old species, MuddyBot teaches researchers about living organisms' transition from water to land while also helping roboticists build a better all-terrain robot. According to the Georgia Tech College of Sciences' blog, MuddyBot is the product of a team comprising "physicists, biologists, and roboticists from the Georgia Institute of Technology, Clemson Univesity, and Carnegie Mellon University."

The MuddyBot study shone a light on the importance of tails in hybrid land-and-water locomotion. The African mudskipper, MuddyBot's inspiration, is a still-extant relic of prehistory that closely resembles fossil records of early terrestrial animals. In examining the mudskipper, researchers found that its tail is essential for transitioning from the water to the land.

With that insight, the team's roboticists created an all-terrain robot that can move between land and water with relative ease.
2.5
Score
Popularity
Activity
Freshness
Get Trend Hunter Dashboard