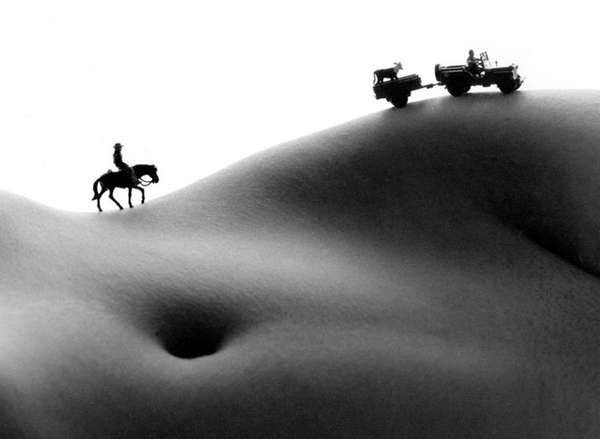 Ana Lopez — December 14, 2011 — Tech
References: teger & mymodernmet
Share on Facebook Share on Twitter Share on LinkedIn Share on Pinterest
For many, the human body is a wonderland, and for self-taught photographer Allan Teger, this belief is more than a quaint saying. The Florida-based artist, who is also a psychologist, decided to used bodies as his platform to develop miniature narratives. Departing from his interest in the human consciousness, Teger thought of the silhouette of naked people to combine beauty and storytelling together.

The series is called Bodyscapes because the closeness of the camera to the subjects creates an optical effect where the curves of the body become an actual landscape for the eyes. The female curves transform into hills where cowboys ride their horses and cyclists ride their bikes. Teger used little toys and altered the lighting to make his landscapes look even more real and also to intensify the optical illusion.

The series by Allan Teger makes audiences explore themes like perception and reality. He will be part of the Las Olas Festival of the Arts in Ft. Lauderdale, Florida, which takes place during the month of January, 2012.
6.8
Score
Popularity
Activity
Freshness
Attend Future Festival