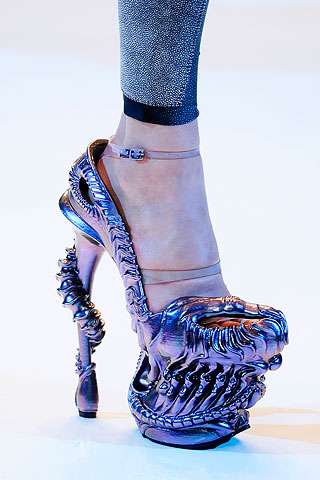 Marissa Liu — October 8, 2009 — Fashion
References: alexandermcqueen & obsessedwithshoes
The Alexander McQueen Spring 2010 shoes were out of this world, well, at least out of the bit of the world that is covered in land. The outrageous footwear perfectly complemented the designer’s weird and wacky design sensibility. Towering platform foot encapsulations that looked almost like bejeweled ant-eaters, as well as heels that resembled old-timey diving suits and Poseidon-inspired pumps were on display.

In the world of designer footwear, the Alexander McQueen Spring 2010 shoes reign supreme. These terribly chic, ultra glam, fashion-forward heels are not for the faint of heart. We are positive that the vase-shaped platform ankle boots will be popular editorial editions, but we doubt that they will go into production.
6.9
Score
Popularity
Activity
Freshness