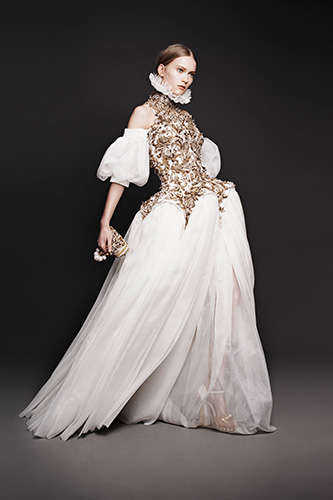 Meghan Young — April 25, 2013 — Fashion
References: alexandermcqueen & refinery29
The Alexander McQueen Fall 2013 lookbook captures the 10-piece collection beautifully. A simple photoshoot that captures the drama of the catwalk, the 'stage' is a dark studio, which acts as the perfect canvas for the gorgeously theatrical dresses and gowns.

Heavily influenced by the Elizabethan era, the elegant ensembles showcased in the Alexander McQueen Fall 2013 lookbook may be dramatic, but some of them could be worn to the office. That is, if a person wants to make a statement. Complete with the label's signature intricate details including high-neck ruffled collars and glittering beading as well as pin-sharp tailoring, the looks are fit for royalty.

It is impressive to note that designer Sarah Burton had the time to design all of the pieces in the Alexander McQueen Fall 2013 lookbook while pregnant with twins.
6.7
Score
Popularity
Activity
Freshness