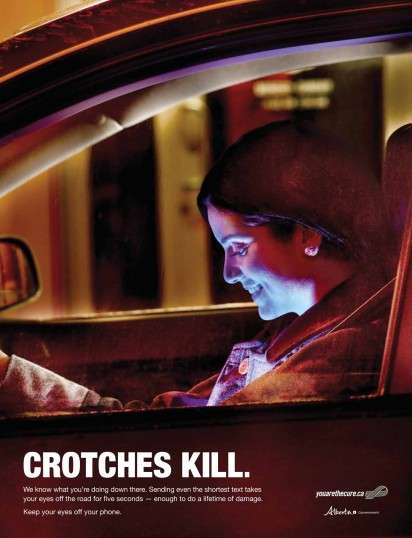 Meghan Young — February 28, 2013 — Autos
References: redtheagency & ibelieveinadv
Share on Facebook Share on Twitter Share on LinkedIn Share on Pinterest
The caption for the Alberta Office of Traffic Safety ad campaign starts with, "We know what you're doing down there." If it weren't for the familiar glow on the drivers' faces, people would have had to drag their minds out of the gutter. If this ad does its job, that will hopefully be the only thing that needs dragging out of a gutter...or a ditch.

Created by RED The Agency, an ad agency based in Edmonton, Canada, the Alberta Office of Traffic Safety ad campaign boldly states, "Crotches Kill." Of course, it isn't referring to the crotch itself, but what rests on the crotch to stay out of sight. It goes on to read, "Sending even the shortest text takes your eyes off the road for five seconds--enough to do a lifetime of damage."
3.7
Score
Popularity
Activity
Freshness
Get Better and Faster