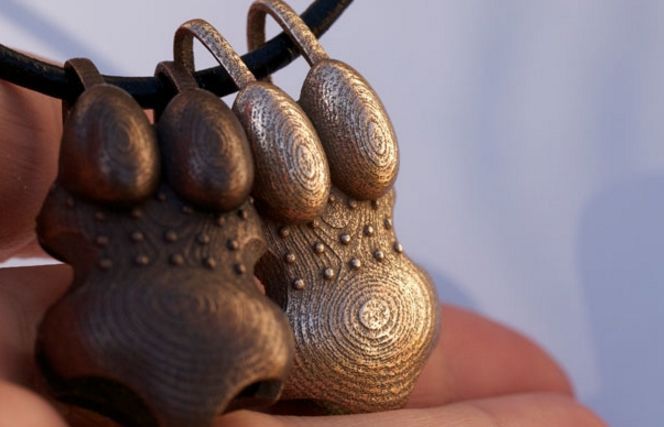 Cadhla Gray — December 5, 2015 — Art & Design
References: shapeways & 3dprint
Share on Facebook Share on Twitter Share on LinkedIn Share on Pinterest
Inspired by activist and artist Kubra Khademi, these pendants of armor fight for Afghan women's rights and represent the mistreatment and violence that many must endure. The courageous artist wore a metal suit of armor in the streets of Afghanistan, representing the one she wished she had owned as a child. She walked among a group of angry men for as long as she felt safe, which sadly lasted just eight minutes until she had to flee.

On the other side of the world, in an effort to support Kubra, small 3D-printed versions of these suits of armor were created by Jeremy Burnich, founder of the Joy Complex Firm. These beautiful medallions are sold with part of the proceeds supporting a group that raises awareness for Afghan women's rights. The strong pendants are small but meaningful and can be hung on the end of a necklace, as charms on a bracelet or as a simple reminder of the strength that these women have.
1.2
Score
Popularity
Activity
Freshness
Jeremy Gutsche Keynote Speaker