Umbrellas In Wine Bottles
Next
Set of
Related
Ideas 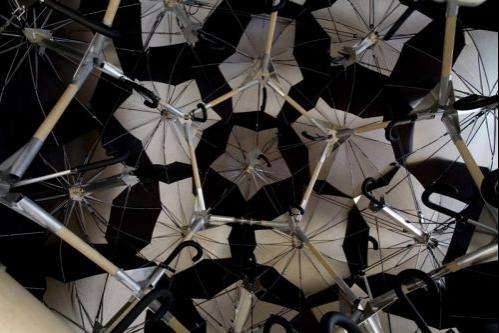 Abri No 177 by Ozcollective Is An Architectural Cluster of Parapluie

The group met as freshman at l'Ecole Spéciale d'Architecture in Paris, and although their cluster of parapluie look like a work of art, the group insists they are architects before artists.

"The first step to understand the Abri No.177 stands in its name," Alexandre Pachiaudi, a member of Ozcollective, says. "In French, Abri means shelter. We developed this project around this idea. The umbrella was chosen as the main material for the project because it is a fascinating manufactured object with plenty of evocating meaning. It is one of the most tiny and delicate shelters a human can ever use. We tried to create something between the roundness of a human breast and the agressivity of a hedgehog."

The gallery shows a few of pictures of Abri No.177 by Ozcollective. Do you see the agressivity?
2.8
Score
Popularity
Activity
Freshness
Get the 2021 Trend Report FREE