Dogvertising
Next
Set of
Related
Ideas 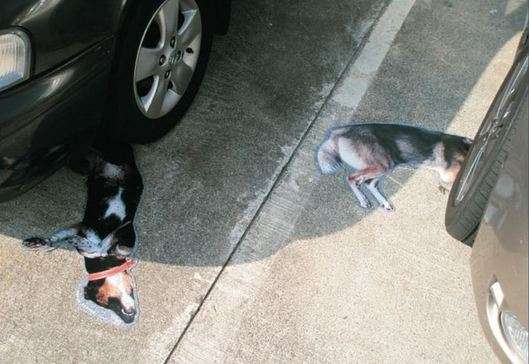 Senduran Bhakthakumaran — March 23, 2012 — Marketing
References: ibelieveinadv & coloribus
The Society For Abandoned Animals 'Dead Dogs' marketing campaign has turned to public stunts to gain awareness. By plastering various grounds with 2D cutouts of dogs that appear flattened when a car rolls or parks over them, the society hopes to have pet owners understand the importance of providing safe shelter for their four-legged patrons.

Animal cruelty does not only account for physical harm one inflicts upon their pet, it can be just as easy as ignoring their animal as well. Stray dogs meet unnecessary ends when abandoned due to an owner's laziness. At high-traffic hours, the Society For Abandoned Animals Dead Dogs campaign was put into effect and various cars rolled over the pre-flattened dogs causing drivers and passengers an immediate shock when noticing a pancaked canine under their wheels. Upon realizing it was a fake, the initial sting of horror is what will remind audiences how important it is to keep their pets safe from harm.