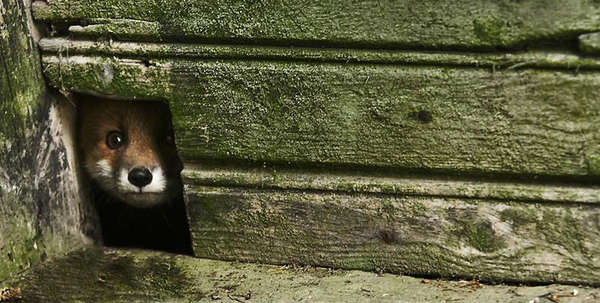 Amanda Greer — August 18, 2013 — Tech
References: kafa.fi & lostateminor
Share on Facebook Share on Twitter Share on LinkedIn Share on Pinterest
While it might sound strange to say that photographs of abandoned animals could be made beautiful, Kai Fagerstrom's new photo series, titled 'The House in the Woods,' proves that abandoned animals can indeed be made beautiful, simply because they were meant to be left alone in the first place.

The area near Fagerstrom's summer home in Finland just experienced an upsurge of abandonment from its tenants, leading to several cottages falling into decay and disrepair. Fagerstrom recently visited, and realized that many wild animals had moved into these houses since the humans left them. He took a few snapshots, and managed to capture things like a small fox peeking through a hole in the wall, a squirrel looking pensively through a window, and even a wildcat strutting on top of an armoire.

With these photographs, Fagerstrom has shown that nature quickly takes back what it originally created, no matter how sure humans are of their buildings' sound structure. After looking at these photographs, it's clear that animals flourish without human interference, and can often make better use of man-made structures than we can.
6.9
Score
Popularity
Activity
Freshness
Access Advisory Services