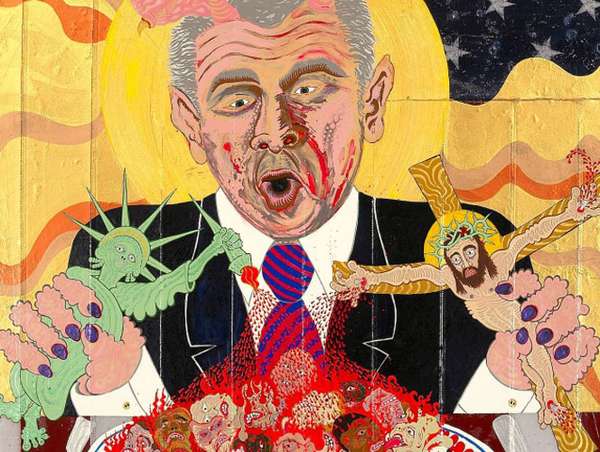 Aaron Johnston is a St. Paul, Minnesota native who currently resides in New York City. His artwork has been exhibited around the world, including Beirut, Lebanon, Berlin, Germany, and Copenhagen, Denmark.

Looking through his portfolio, it's easy to see why. He manages to blend elements of political satire, surrealism, and psychedelia in his work to create a distinctive aesthetic that is both stylistically alluring and eye-catching.

My favorite illustration from the Aaron Johnston portfolio features former United States President George W. Bush eating a plate of human spaghetti, using the Statute of Liberty and Jesus as his salt and pepper. The message here is clear, Johnston is protesting Bush's foreign policy and the way he utilized patriotism and religion to buoy his War on Terror. Whether or not you agree with Aaron Johnston's politics, credit must be given to his ability to create such a poignant and clear statement in art that is both aesthetically appealing and intellectually challenging.

Aaron Johnston just recently had his work exhibited at the Royal T. Los Angeles Museum and at MISC New York. Click through our gallery to view some of his best work.
3.2
Score
Popularity
Activity
Freshness
View Innovation Webinars