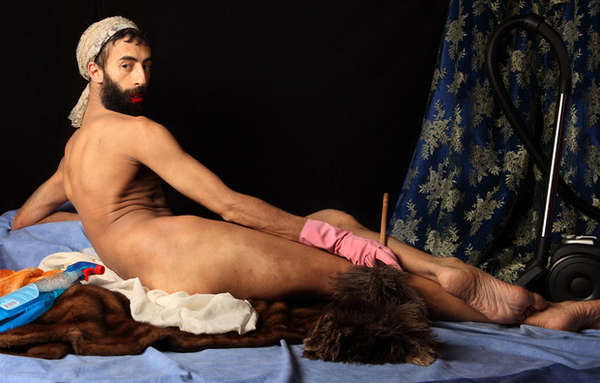 Meghan Young — April 25, 2013 — Naughty
References: theinvisibledog.org & coolhunting
Share on Facebook Share on Twitter Share on LinkedIn Share on Pinterest
The 2Fik’s Museum art exhibit borrows elements from classical paintings to create staged photographic scenes that are at once traditional and modern. While the overall look of the images as well as the setup of the shots definitely date back to another era, the addition of modern props and clothing give them an entirely different perspective.

Showing at The Invisible Dog in Brooklyn, New York, the 2Fik’s Museum exhibit could be considered gimmicky since the Parisian artist himself appears in each shot, even multiple times. Nevertheless, it does explore identity, religion, voyeurism and canonical art in a creative and clever way.

Cool Hunting writes about the 2Fik’s Museum exhibit, "The photographer becomes a universal stand-in, inhabiting the roles of iconic figures so that we can look on them with fresh eyes."
6.9
Score
Popularity
Activity
Freshness
Get Better and Faster