Death Masks of the Famous 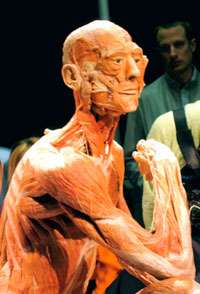 10 Things Your Body Can Do After You Die

Apparently being dead is no deterrent. Ghost marriages are part of Chinese culture going back some 2000 years. Today the practice is on the rise mainly to give a dead bachelor a corpse bride. With fewer women than ever -even dead ones- some rural men have reportedly murdered women to sell their bodies as ghost wives.

2. UNWIND WITH A FEW FRIENDS

Here Koerth-Baker talks about Victorian mummy unwrapping parties - yes, the hosts who could afford to purchase an Egyptian mummy would invite some friends over to unwind the bandages and have a party after.

Human cadavers artfully flayed have been exhibited as museum art pieces with shows called BODY WORLDS and BODY REVEALED. The exhibitions are highly controversial mainly because it is not clear if the bodies are voluntarily donated. BODY WORLDS claims theirs are unclaimed Chinese bodies - read, “executed political prisoners”.

Apparently local crematoriums in one Swedish city supply 10% of heat to city homes.

5. BE A CADAVER FOR MEDICAL SCHOOLS

Cadavers are always in short supply. Individual body parts actually fetch more money so much so that tracking chips are now used in California to help track down stolen body parts.

For decades, the well preserved corpse of Lenin was on display. Clever Soviet scientists perfected a way embalming that worked much better than that used by ancient Egyptians.

7. SNUGGLE UP WITH YOUR STALKER

Koerth-Baker wrote about the bizarre case of a beautiful Floridan, Elena Hoyos,who died in 1931 and whose embalmed body was stolen by an obsessed man. He even slept with her corpse on his bed.

8. NOT BE THE CAUSE OF EPIDEMICS

Corpses are not the cause of epidemics that often ensue after natural disasters. It is the terrible living conditions of the survivors that spread disease.

In the 9th century, Pope Stephen VI exhumed the body of his predecessor, dressed it in full papal regalia so the deceased man could stand trial for perjury and violation of church canon.