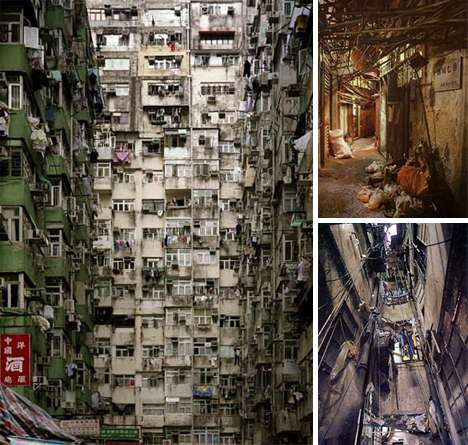 Let me offer a little history of all the cities and villages in the gallery:

Kowloon Walled City is a tiny Chinese enclave that was located in the middle of British Hong Kong for decades. The town was torn down in 1993.

The circular orange structures in Taiwan were supposed to be futuristic holiday villages on the water. However, construction had to be halted because of multiple problems. The cultural lore of the nearby towns believe the houses are haunted and people stay away from them.

Next comes a Pripyat a city near the Chernobyl Nuclear Power Plant. The city was abandoned following the April 26, 1986 nuclear meltdown in Chernobyl, within the Soviet Union.

Next is the town of Balestrino, which is located high on a bluff in the Italian province of Savona. Due to constant earthquakes, the residents were moved out decades ago.

Next is the walled medieval town of Craco, which is an abandoned Italian village deserted due to plagues, drought and earthquakes. The last residents were evacuated in the 1960s.

Cairo, Illinois is a 19th-century small town. The population has dropped to 2,000 as of the year 2000, but as people left, efforts have been made to preserve the historic buildings in the village.

Following is a Soviet gulag which was once used as a work and prison camp and today is completely abandoned.

Next we have the deserted village of Castelnuovo in Tuscany which, according to WebUrbanist, is “thinly guarded by a half-broken fence. One of the strangest features of the abandonment is strange quizzes scrawled on the walls of many of the buildings since the area’s desertion--Myst-like puzzles in a likewise abandoned village.”

The next is the area of Famagusta also known as Varosha. WebUrbanist says, “In the 1970s...the Turkish invaded and claimed the tourist territory as their own. They erected fences with warnings and forbade the return of any residents.”

Finally, the city of Beichuan in China was leveled by an earthquake which left thousands of dead and tens of thousands of people homeless. It is unclear whether the government in Beijing will rebuild it or just let it go into further decay.
6.5
Score
Popularity
Activity
Freshness
Access Advisory Services