Coping with Grief Through Play 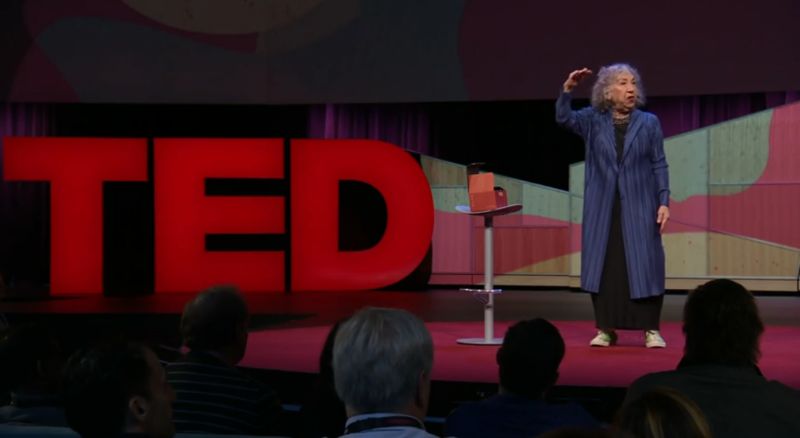 Emily Levine's Motivational Talk on Reality Has a Comedic Twist

Kalina Nedelcheva — June 5, 2018 — Keynote Trends
References: emilysuniverse & ted
Share on Facebook Share on Twitter Share on LinkedIn Share on Pinterest
Emily Levine is a humorist, writer and philosopher with a strong affinity to science, who delivers a talk on reality that is truly inspirating. It essentially pushes toward embracing the challenges of life with a positive attitude. The speaker begins with the grim news of her diagnosis with stage IV lung cancer. However, she is "so OK with it." In fact, she equates it to the democratic leadership — "not convinced it can win, [...] basically just sitting there, waiting for Goldman Sachs to give it some money."

In an infectious manner, Emily speaks about her illness as a natural part of the "cyclical rhythms of the universe," where every life form is necessarily subjected to a process that calls for generation, degeneration and regeneration. Emily's talk on reality is abundant in content that is traditionally held as hard to talk about, yet, the speaker's delivery is so upbeat and honest that it, in fact, urges the audience to celebrate death as the inevitable outcome that it is and even perceive it as a form of honor.

In her quest in making friends with reality, Emily Levine discovers the dualist character of the world — the fact that everything comes in pairs. Unsurprisingly, she identifies life and death as an established duplet. During her talk on reality, the speaker holds that to cheat death is to be disrespectful to nature, because anti-death means to be anti-life and anti-nature. To some extent, being anti-death also translates to anti-women, with regard to the symbolic crossover between women and nature.

With a heartwarming instance of gratitude, humility and joy, Emily Levine finishes her talk on reality, thanking her audience for their support and willingness to listen.
4.7
Score
Popularity
Activity
Freshness
Access Advisory Services

Fighting Addiction with Nature
In His Talk on Addiction, Dax Justin Explores the Merits of Nature
play_circle_filled