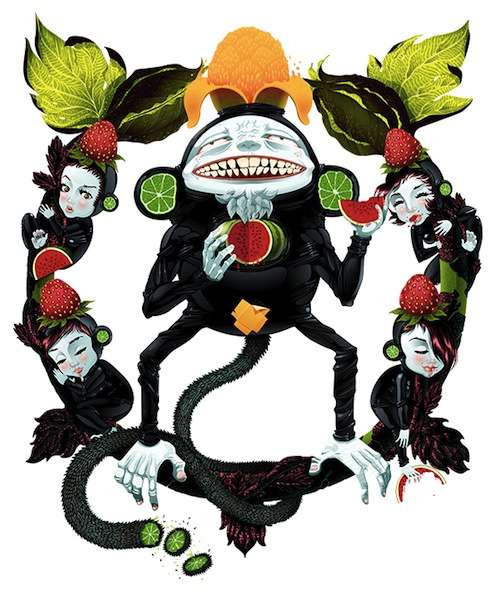 Jordan Sowunmi — August 10, 2011 — Art & Design
References: behance.net & behance.net
Share on Facebook Share on Twitter Share on LinkedIn Share on Pinterest
Looking through the Zumofilla by Rafahu collection, it's virtually impossible to not be immediately creeped out. The images are bright, big, and jarring. Each Zumofilla by Rafahu creation features a small, animal-like character described as a "God gone mad," in Rafahu's preamble for the collection. This "God" owns a procession of female slaves who enjoy their lives with him, even though his kingdom only allows the consumption of fruit.

Yes, Zumofilla by Rafahu is not your daddy's art collection. Despite the relatively odd introduction and subject manner, Zumofilla by Rafahu features some of the most enthralling and effervecscent artwork I have seen in some time. Rafahu's deft ability to make these grotesque images eye-catching and alluring is a testament to his skill as an illustrator and animator. He is based in Mexico City, where he works as an interactive designer for Grupow, a digital ad agency.
2.7
Score
Popularity
Activity
Freshness
Get the 2021 Trend Report FREE