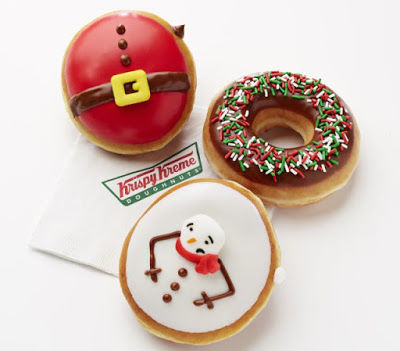 Katherine Pendrill — November 28, 2016 — Lifestyle
References: krispykreme & brandeating
Share on Facebook Share on Twitter Share on LinkedIn Share on Pinterest
With Thanksgiving officially over and only a few days until the start of December, Krispy Kreme has finally unveiled its 2016 Christmas Collection. While the collection features a number of returning favorites, it also includes a couple of new holiday treats.

The 2016 Christmas Collection from Krispy Kreme includes three new holiday donuts and a festive drink option. The donuts include the returning Holiday Sprinkles Donut, as well as the Santa Belly Donut, which is decorated with chocolate icing and a candy belt buckle. For those looking to try something new, the chain is offering a Melted Snowman Donut, which consists of a Kreme-filled yeast donut topped with white icing and a melting snowman design. To round out the menu, Krispy Kreme is also offering a Toffee Mocha latte, which can be ordered hot, iced or frozen.
3
Score
Popularity
Activity
Freshness
Attend Future Festival