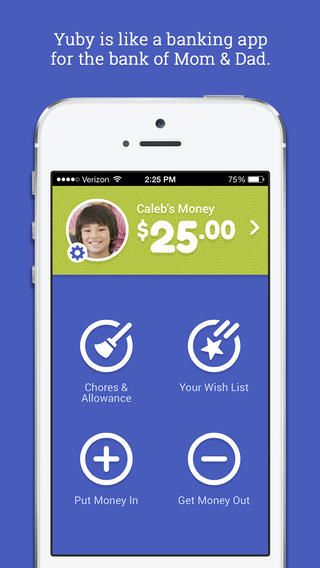 Laura McQuarrie — July 4, 2014 — Tech
References: mutualmobile & itunes.apple
Share on Facebook Share on Twitter Share on LinkedIn Share on Pinterest
The Yuby app from Union Bank was launched not for existing account holders, but for kids. There are a lot of adults out there who struggle with managing their personal finances, because they never had the chance to learn or practice good saving and spending habits in their youth. Yuby doesn't use virtual or play money to teach kids—in a sense, it's like a kid's first bank account, since it uses real money that is monitored by a parent.

YUBY has three features: a chore list, an activity log and a wish list. Each of these has a different function, which helps to reinforce things like budgeting, keeping an eye on spending habits, cost comparisons and the learning the value of money, as an allowance can be increased by doing chores.

A parent can make actual withdrawls and deposits to Yuby using a secure pin code, as you would on an ATM.
2.4
Score
Popularity
Activity
Freshness
Access Advisory Services