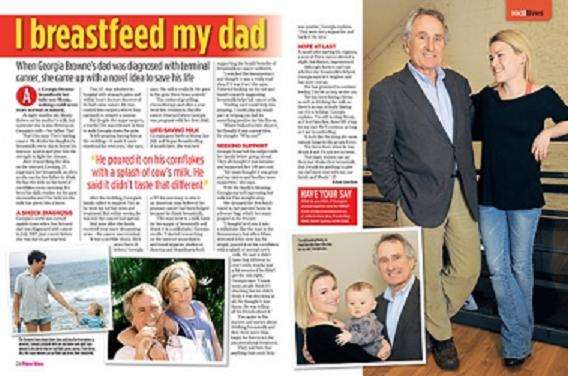 TopDog — April 20, 2009 — Life-Stages
References: au.lifestyle.yahoo & trendhunter
Share on Facebook Share on Twitter Share on LinkedIn Share on Pinterest
It is scientifically proven that human breast milk contains the essential nutrients for growth. Recent discoveries have produced evidence that breast milk also contains antibodies that help build the immune system in infants. But can it fight cancer cells? And does it work for adults?

Georgia Browne’s father was diagnosed with colon cancer in July 2007, and as with every family member or friend, Georgia was devastated. After giving birth to her son July 2008, she came across a documentary boasting that breast milk has the ability to fight cancer cells.

Now her father Tim, drinks her breast milk daily in hopes that it will fend off the cancer in his body. There has been some improvement in Tim’s health, and Georgia is proud to provide the breast milk to her father if it means that they will have more time together.

Not many people can claim that they feed their father their own breast milk, but if it does help, then maybe more people will try.
3.8
Score
Popularity
Activity
Freshness
Get Trend Hunter Dashboard