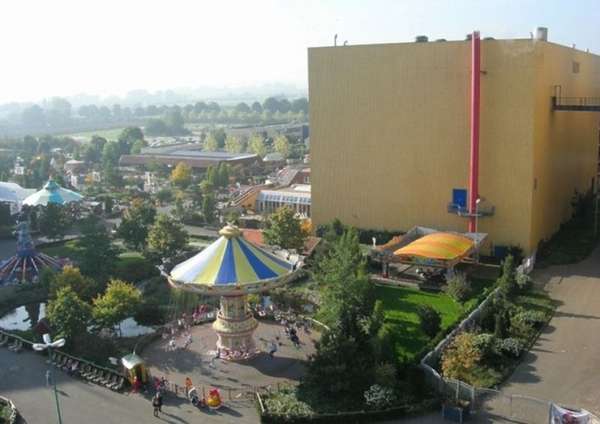 Wunderland Kalkar is Built on an Old Nuclear Power Plant

Michael Hines — June 3, 2011 — Life-Stages
References: wunderlandkalkar.eu & amusingplanet
Share on Facebook Share on Twitter Share on LinkedIn Share on Pinterest
Ever wonder what happens to nuclear power plants when they are scrapped? Neither did I, until I saw Wunderland Kalkar. Wunderland Kalkar is an amusement park in Germany that sits on what used to be an old nuclear power plant.

The power plant was completed and operational by 1985, but thanks to the Chernobyl disaster in 1986, the plant was taken offline. Rather than taking a 4 billion dollar loss, the plant's owners sold it to a Dutch investor who eventually turned it into Wunderland Kalkar.

Wunderland Kalkar has a unique design that can be found nowhere else in the world. Portions of the power plant have been incorporated into the park's rides, such as a giant swing housed in an old cooling tower. Fears of leftover radiation apparently don't concern visitors, as around 600,000 people visit the park every year. Reclaiming old nuclear power plants and turning them into profitable business ventures could become a lot more common, especially as governments around the world become more and more hesitant about using nuclear power after the recent Japanese nuclear disaster. I wouldn't be surprised at all to see a few more Wunderland Kalkar-style parks opening up over the next few years.
5.5
Score
Popularity
Activity
Freshness
View Innovation Webinars

Special-Needs Theme Parks
Morgon's Wonderland is Fun for Everyone