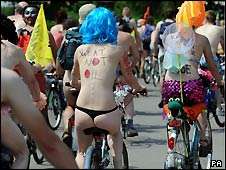 Bianca — June 10, 2008 — Naughty
References: news.bbc
Share on Facebook Share on Twitter Share on LinkedIn Share on Pinterest
Due to its popularity last summer, The World Naked Bike Ride took place again this year. The UK protest featured people wearing nothing but their bicycles (OK, some wore body paint and wigs) in a large-scale visual protest against global car dependency. Participation doubled from that of last year's events! Now in its third year, the naked cycling initiative draws awareness to the environmental benefits of cycling.

"We had twice as many people as last year, and the atmosphere has been fantastic," said Duncan Blinkhorn, who helped co-ordinate the event.

And yes, you better believe it, people were fully naked, even upon approval of Sussex Police.

"In June 2008, in cities around the world, people will be riding bikes naked to celebrate cycling and the human body," the summary of the above YouTube video explains. "The World Naked Bike Ride demonstrates the vulnerability of cyclists on the road and is a protest against car culture."

With gas prices skyrocketing this year, over 500 people were willing to hop aboard to pedal for the cause. Next week's even in London should bring in even more participants!