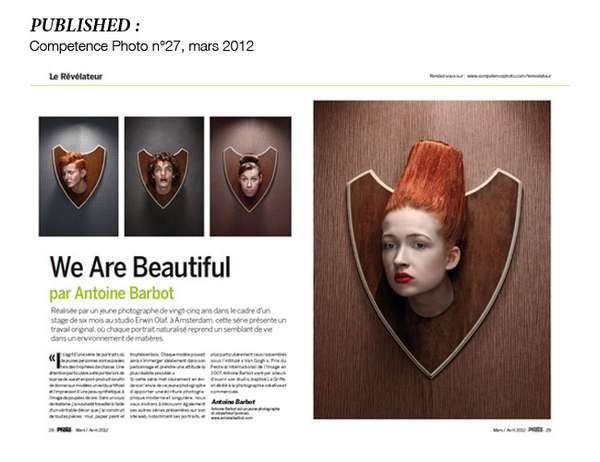 The Antoine Barbot 'We Are Beautiful' Series is Impossibly Morbid

Meghan Young — March 27, 2012 — Fashion
References: antoinebarbot & whitezine
Share on Facebook Share on Twitter Share on LinkedIn Share on Pinterest
The 'We Are Beautiful' photo series presents human beings as hunting trophies. Just like a deer or moose, the people's heads have been mounted on walls in a rather morbid manner. Each person has a different expression that appears to imagine what an animal's actual frozen expression would be as well -- that is, if their faces were as easily interpreted. For instance, one person looks surprised while another is sad.

Shot by Antoine Barbot, a 25 year-old French photographer, the We Are Beautiful photo series was created for a six-month internship at Studio Erwin Olaf in Amsterdam. He says, "For the sake of realism, I wanted to work with a real scene that I built from scratch: wall, wallpaper and wooden trophy" while making the models look like "wax dolls."