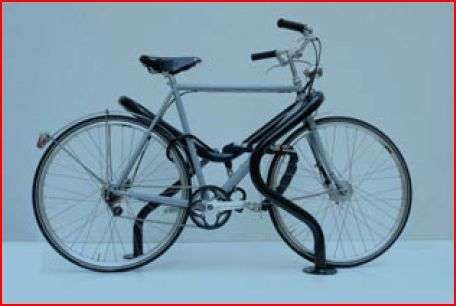 Innovative Ways to Keep Your Bicycle Safe, Indoors and Out

Tinkalicious — December 30, 2008 — Eco
References: dexigner
Share on Facebook Share on Twitter Share on LinkedIn Share on Pinterest
Bicycles are common modes of transport for many people, even more so these days. Bicycle theft, it seems is an even bigger problem in some cities, so much so that in London, it appears they are holding a six week exhibit, “Putting the Brakes on Bicycle theft, Design exemplars for secure cycling."

The anti-theft designs are simple in their concept, but look like they would be very effective, or at least a big deterrent.

Anti-theft bike products in the gallery include the caMden Anti-theft Bike Stands, the Cyclehoop, PlantLock, a green, in more ways than one, way to lock up your bike, and the Cycloc.

Cycloc was designed to store interior bikes but works for protecting outdoor ones. The folding handlebars serve well for saving space during storage and also as a steering lock by securing the handlebars to the frame.

The Cyclist’s Mirror, while not really a theft deterrent, allows stylish storage inside the house, rather than leaving your ride out on the street.

Last but not least is the SmartLock, somewhat like the theft systems used on clothing, if the lock is cut, liquid sprays all over both the bike and the thief, a major deterrent.
3.6
Score
Popularity
Activity
Freshness
Get Better and Faster

33 Couture Cruisers for Cyclists
From Luxury Electric Bikes to $100,000 Bicycles