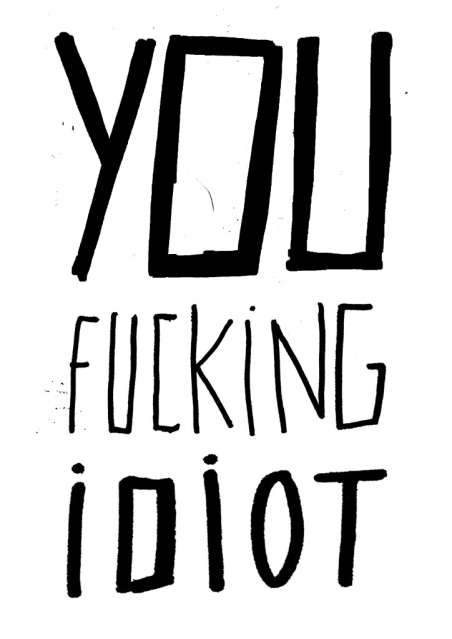 Jason Soy — September 3, 2011 — Naughty
References: ritabored.blogspot & urhajos.tumblr
Share on Facebook Share on Twitter Share on LinkedIn Share on Pinterest
I don't personally know Rita Gomes, known more commonly as Wasted Rita, but from these wicked posters, I can tell she'd be a kickass person to hang around. With a dark sense of humor that's expressed through these vulgar posters as well as writings on her personal website, the self-described freelance graphic designer, illustrator and agent provocateur is easy to be enamored with.

So what do these Wasted Rita posters constitute? Well, they're usually directed at the viewers and you can rest assured they'll be demoralizing in some way. Her word choices are also littered with vulgarity, which ultimately culminates in hilariousness.

Implications - This particular item is effective at garnering consumer attention because it utilizes shocking vocabulary to shake viewers out of apathy. Corporations may consider using a similar approach in promotional campaigns to generate consumer interest as shocking materials tends to attract consumers more so than mundane advertising.
6
Score
Popularity
Activity
Freshness
Get the 2021 Trend Report FREE