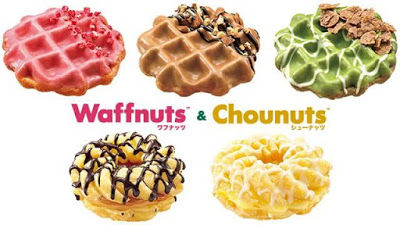 Laura McQuarrie — June 4, 2015 — Lifestyle
References: krispykreme.jp & brandeating
Share on Facebook Share on Twitter Share on LinkedIn Share on Pinterest
If you have ever wondered what happens when you cross donuts, waffles and cream puffs, Krispy Kreme Japan can now provide you with a most satisfying answer. The two new limited offerings from the donut maker include creations called 'Waffnuts' and 'Chounuts.'

Waffnuts are a cross between a Belgian waffle and a donut that boasts a light, crispy texture in one of three flavors: Strawberry, Almond and Uji Matcha. On the other hand, the Lemon Cheese and Double Caramel Chounuts are made with a choux pastry batter, which gives them the same consistency as a cream puff or cruller.

The hybrid components of these new offerings from Krispy Kreme Japan doubles its chance of success, especially in a market where crossover donuts, desserts and food in general has become extremely popular.
2.2
Score
Popularity
Activity
Freshness
Get Trend Hunter Dashboard