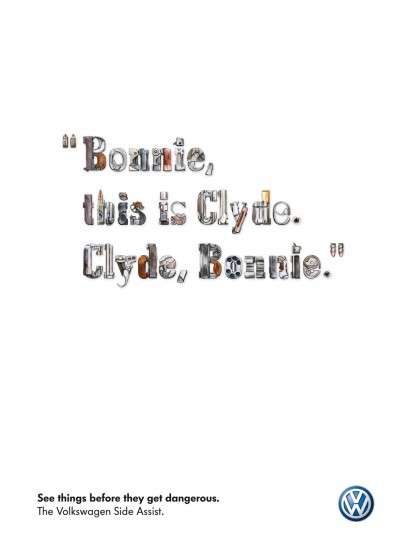 Meghan Young — December 10, 2011 — Autos
References: ddb-tribal & ibelieveinadv
The Volkswagen Side Assist ad campaign presents a clever comparison between this car's danger-avoiding feature and some iconically dangerous individuals. The campaign focuses on these particular individuals just before they became dangerous. For instance, the campaign uses the time Bonnie and Clyde first met as well as the birth of Hannibal Lecter. In doing so, it shows that with the Volkswagen Side Assist people can "see things before they get dangerous," as the tag line states.

Conceived by DDB Tribal Group, an ad agency based in Berlin, the Volkswagen Side Assist ad campaign helps eliminate human error by recognizing potential dangers in the driver's blind spot and avoiding them. If only a similar safety system could have been set up to avoid the messes caused by the characters featured in this campaign, the world would be much a safer place.
3.2
Score
Popularity
Activity
Freshness